No matter what our office environment looks like, whether we work out of our home or within an open plan space in a corporate building, we all experience a lot of sitting at our desks.

Comfort and practicality remain some of the key factors in choosing an office chair, but that doesn’t mean that design has to suffer. Here we take a look at some iconic designs across different eras:

Described by Herman Miller as “a true machine for sitting”, the company’s Aeron office chair was designed in 1994 by Don Chadwick and Bill Stumpf. One of America’s most famous products this best-selling chair now sits in the permanent collection at the Museum of Modern Art, New York. 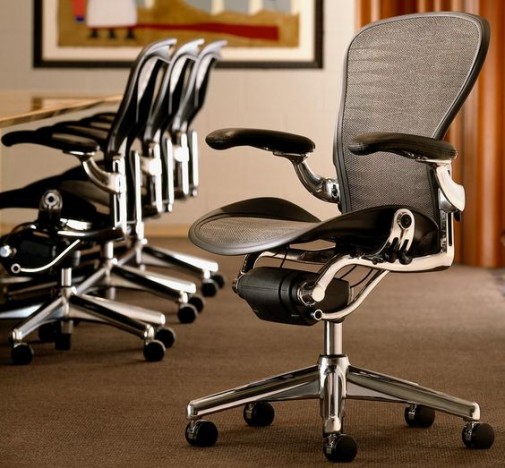 The Aeron was designed according to what the body needs, not what the eye likes, resulting in a chair that looked more engineered than designed.  In technology, design has to continually evolve to keep current. In furniture, not so much, however in this instance Herman Miller have just last month launched a re-design.

“One of the concerns, originally, was we needed to preserve the iconography of the chair,” Chadwick says. “It has such a strong visual personality that there was reluctance to changing it very much.”  It retains the shape and size of the original back frame. In the new version however, the real difference is in the chair’s mechanics. Consider the tilt function. CEO Brian Walker compares the tilt on a chair to the engine in a car—and an engine from 2016 will undoubtedly boast better performance than one from 1994. 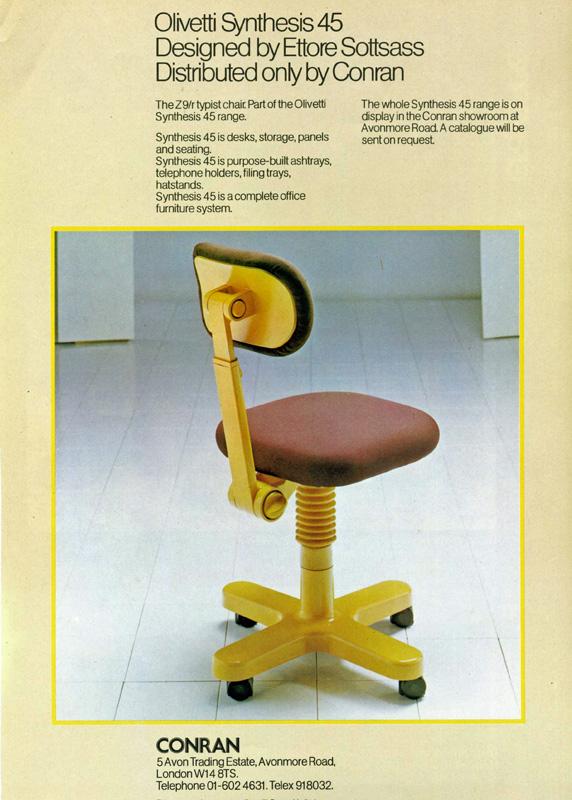 Among the most fruitful collaborations between an industrial concern and a designer was that of Ettore Sottsass and the Italian office equipment manufacturer Olivetti. Appointed by the company’s founder Adriano Olivetti to work alongside his son, Roberto, and the engineer, Mario Tchou, together they developed a series of technically innovative and visually seductive office products including the jaunty Synthesis 45 office chair which, with its bright colours and chunky silhouette, was intended to appeal to younger office workers and truly epitomises 1970s style.

Given the bespoke nature of Frank Lloyd Wright’s designs his furniture was available to only a small number of clients until late in his career. But unlike Arts and Crafts designers, Wright saw the value of machines. He extolled their ‘wonderful cutting, shaping, smoothing and repetitive capacity’, which could master, with ease, the signature square-section spindles of his chairs, beautifully brought to light in this office chair from the turn of the 20th century.

So a very brief look at the development of the ‘humble’ office chair, from crafted, individual pieces to more mass-produced items which, as the Aeron chair, continues to sell millions across the world. What has not been compromised however is the attention to detail and design inspiration behind each chair, resulting in these once practical and essential items of office furniture becoming part of our design history.