We’re delighted to announce a new stockist for Moody Monday’s stylish homeware products. Perfect for that special Christmas gift for friends and family.

The UK’s largest art, craft and design gallery, set in Newcastle’s cultural quarter, the Biscuit Factory, will stock a selection of our cushions, coasters and placemats in it’s cutting-edge store next month.

Choose from a delightful range of luxury cushions with the most original decorative patterns. Durable, opulent and exquisitely made – our cushions are the perfect accessories for the stylish, self-assured home owner. Available in sumptuous velvet or practical cotton, in a range of patterns and sizes.

What colours and trends will you choose for your table decor this Christmas? We predict contemporary graphics, set against classic glassware and cool white crockery will bring a simple, yet elegant look to any festive occasion.

Our tableware range has been designed to add a touch of luxury to any dining table. Mix and match individual pieces for a polished contemporary style. Super stylish and luxurious, yet practical for everyday use, these eye-catching coasters and placemats make an immediate statement. 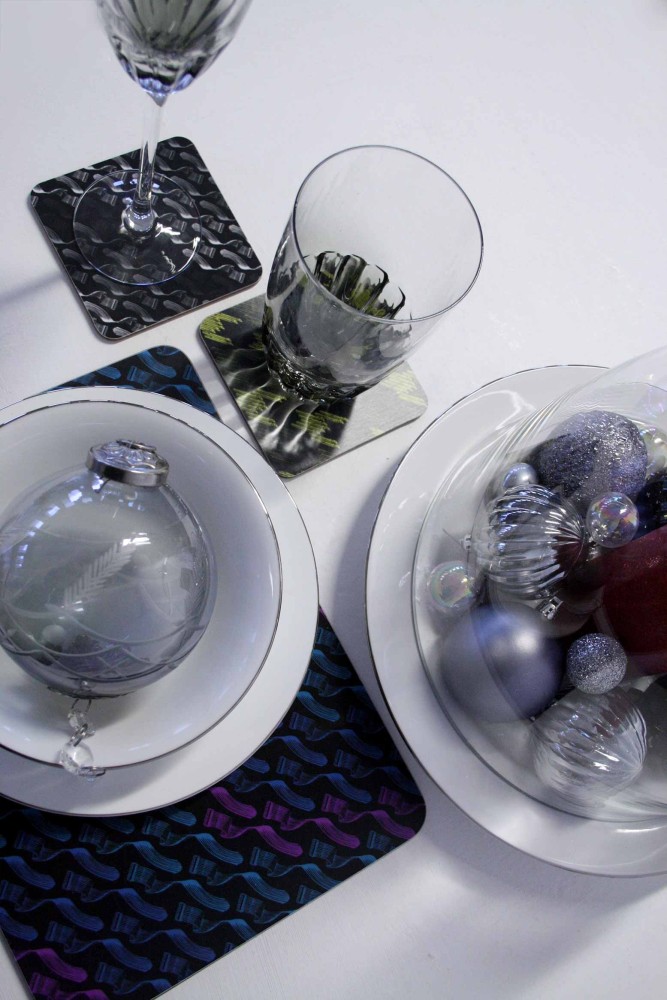 For those closer to our Edinburgh studio, we continue to work with the Scottish Design Exchange, Ocean Terminal, Leith as well as Concrete Wardrobe, Broughton Street. Pop in and check out our products, or take a look at all our ranges and order online at https://www.moodymonday.co.uk/product-category/boutique/

As the trend towards co-working spaces continues to grow and expand across some of the world’s most vibrant and creative cities, we take a look at some inspirational creative hubs, offices and studios.

Leeser Architecture has inserted angular and brightly coloured stairwells into an ageing industrial building in Brooklyn to create a vibrant office for creative professionals and entrepreneurs.

To create visual continuity, the firm used brightly coloured angular forms throughout the building, most notably to enclose stairways that connect each floor. Referencing origami, the stairwells feature sharp folds and bright colours – Yves Klein blue on the exterior and teal on the interior.

Architects Gort Scott worked on restoring the unusual façade details, including the wavy concrete canopy, painted yellow, and the decorative tiles, both of which provided design cues for the interior and new signage.

Edinburgh – The Biscuit Factory, Leith, is an arts & fashion hub housed in the former Crawford’s biscuit factory built in 1947.

Housing a selection of established and up-and-coming designers, photographers, and creative businesses it epitomises the perfect urban re-development and offers up a new prototype for living and working.

Dundee – Fleet Collective is based on the top floor of the grade A listed Chambers East building of the old Royal Exchange.

The old Royal Exchange was designed in the 1850s in the ornate Flemish Neo-Gothic style by the famous architect David Bryce, in order to house the Chamber of Commerce.

Transformed into a light and practical working environment, it now exists as an important creative hub in Dundee, whose model as a collective has been commended and internationally recognised.

These innovative design elements, combined with opportunity for more social interaction, also create a sense of wellbeing with proven health benefits for those working in these and similar spaces.

In this highly competitive world of 21st century retail design, more retailers are innovating brilliantly. Many are starting to create experience-based alternatives for customers which ultimately rival their fledgling e-commerce counterparts. These are not your regular brick and mortar stores, these multi-brand ventures instead transport customers into a world of design and luxury in a way that is particularly appealing.

Otherwise fondly known as concept stores, they create a sense of luxury which appeals to the discerning consumer. One iconic concept store which has received a lot of admiration is 10 Corso Como.

Founded in 1991 by Former Italian Vogue Fashion Editor, Carla Sozzani, the store began at a time when even the concept store idea was not known. It was pretty revolutionary in its days. Having begun as an art gallery and bookshop, nowadays they’ve become one of the world’s hippest retail stores with branches in Milan, Seoul, Beijing and Shanghai.

Each store has been tastefully designed with bouts of personality. They showcase and sell eclectic works of art, architecture, fashion, food, music and culture with design which embodies individuality and luxury. So if you’re planning to be in any of these cities, a shopping trip to Corso Como is definitely worth adding to your itinerary.

All images sourced from http://www.10corsocomo.com/

Only someone with an astonishing love of colour will go about creating a massive 800-page manual on how to mix watercolours. That’s exactly what a Dutch artist only known by the name “A. Boogert” did in 1692. The manual which was never published provides readers with an unusual glimpse into the world of 17th century painters and illustrators.

In it, A. Boogert carefully details step by step instructions on how to create as many different hues and tones of colours as are imaginable. The entire book is entirely written and painted by hand and is probably deemed to be the most comprehensive guide to paint and colour ever. 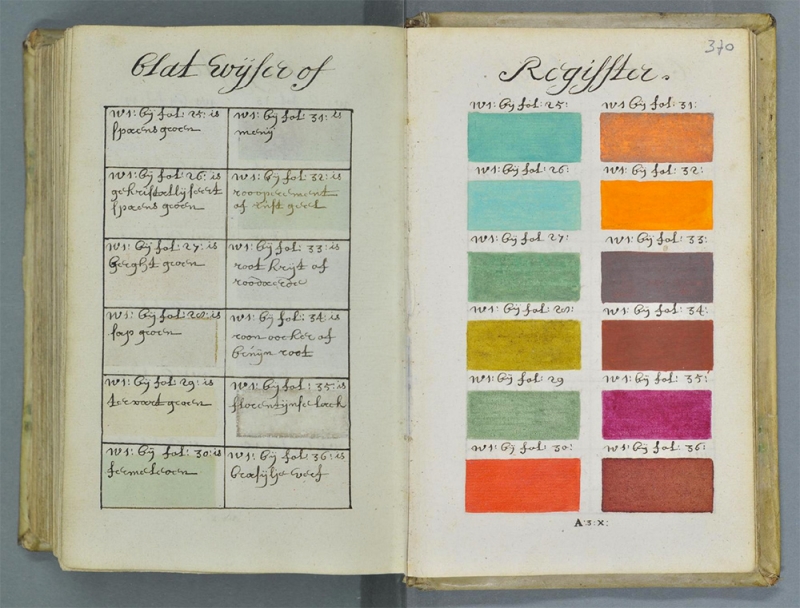 Long before the renowned, more recent Pantone Colour Guide which was only first published in 1963, this Dutch artist had such an enviable grasp of colour. Thought to have been used as an educational guide in its time, he painstakingly documented his process, creating an awesome index of colours. 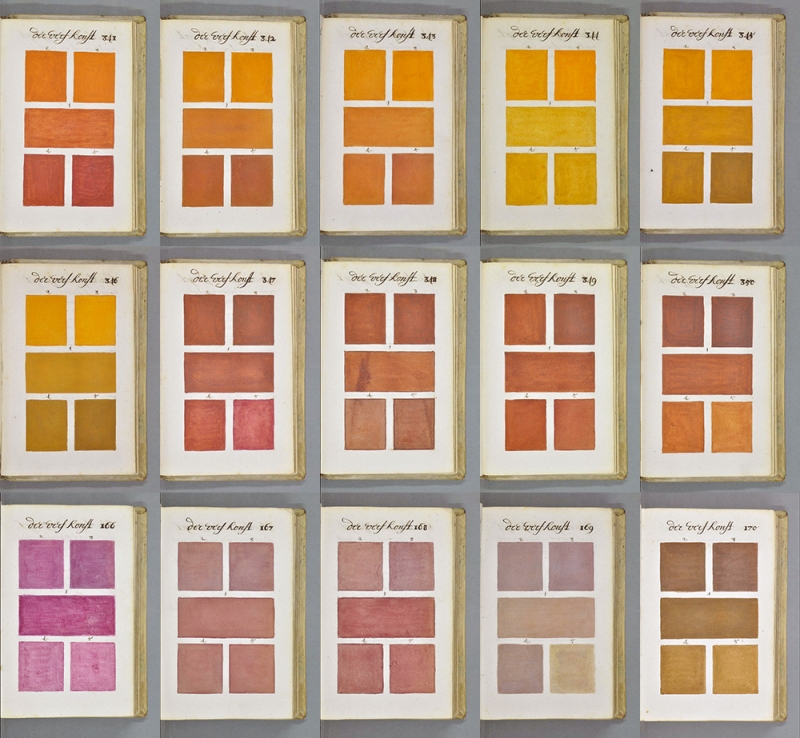 This delightful masterpiece is currently housed at the Bibliothèque Méjanes in Aix-en-Provence, France but is available for online viewing here.